Student success requires follow-up and accompaniment of the student, so it is of vital importance to have an early warning of the various factors that could affect the effective development of their career. The most prestigious universities have stopped seeing data as mere accountability and have adopted predictive analysis through software.

The Big Data or interpretation of massively collected data has allowed institutions of higher education to develop preventive measures to improve their graduation rate.

Below, learn more about the use of technology to prevent dropouts.

University desertion is a phenomenon that affects Latin America in a transversal way. According to a World Bank report, the following figures represent this panorama: 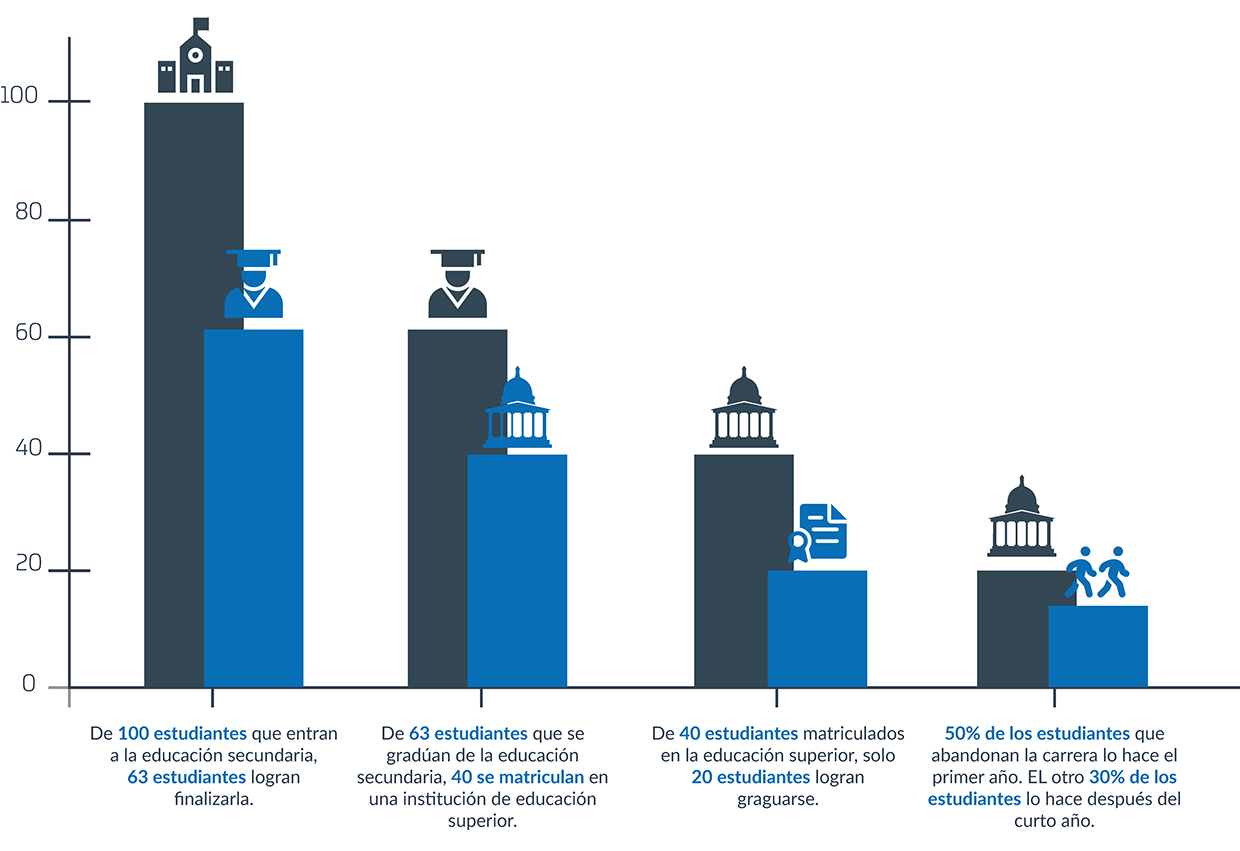 Predictive analysis allows us to distinguish between multiple risk factors. Students who drop out do not necessarily do so because they have insufficient averages; they may also be affected by their work schedules, childbearing, or insufficient resources. This means a significant loss of human talent that would contribute to the region’s economic development.

In North America, prestigious Higher Education Institutions have already taken action. This is the case of Ball State University in Indiana, United States, where they monitor the levels of academic commitment and social activities in order to detect early patterns that may reflect academic difficulties.

Arizona State University, for its part, implemented an alert system that significantly      improved the degree rate from 26% to 41% since its implementation in 2007.

Meanwhile, the University of Toronto in Canada took steps to support students who were having problems with their results.

All these institutions used Big Data, and specifically Machine Learning, to find out the reasons for dropouts that occurred most frequently in their context. Now, let’s see how it works.

Technology to learn from experience

Machine Learning’s algorithms of predictive type have as a fundamental characteristic modeling and extracting useful information from the data, so they can integrate values of different factors of desertion with which an educational institution has.

u-planner’s Chief Data Officer, Sebastián Flores, explains that “with the information available from students who have already dropped out or graduated from the institution, it is possible to calculate their dropout factors individually. With this information, the algorithm is trained every semester, learning from experience to apply the most updated information possible and make a prediction about the students currently in the institution”.

In this learning process the algorithm will begin to distinguish which risk factors carry the most weight for the institution in question. Specialists assure that integrating multiple data sources related to desertion helps considerably to detect the reasons for desertion in a specific way.

This is the work done by technological solutions such as Success, the u-planner software specialized in student success. The u-planner’s CDO comments that “with this platform all this information is centralized and, thanks to Artificial Intelligence and Machine Learning tools, the system manages to learn which are the desertion patterns, and indicates which students, according to their current data, could have more risk of desertion”.

In this way, follow-up will be more personalized, and priority will be given to students who are at greater risk of dropping out.

Success is the solution specially designed to achieve student success and boost the graduation rate. It does this by detecting students at risk of dropping out early, using personal, family, academic, and financial data, among many others.

Privileging the data will give the departments that manage student retention processes the ability to take action to support the student, with information finely tuned to the reality of the institution, in a country, and on a specific campus.

The system integrates factors that have different temporal resolution. For example, there are static data on students, such as university admission, and those with higher temporal resolution, such as class attendance or partial grades, which help trigger particular events that generate a higher or lower student dropout.

“In general, what we have observed is that academic variables, as expected, have a great impact on dropout, however, many times universities have an a priori of certain factors that should have weight, but in practice do not have the importance that one expects.

The good thing about this product is that it is not configured in a fixed and predetermined way, but it adapts to the reality of the institution and the data it has”, said Sebastian Flores.

Success has a flexible focus, which allows to connect different information systems of a university in a single centralized platform. That is, if an entity has data stored in several databases in an internal format, these can communicate through the software.

The digital transformation is driving Higher Education Institutions to achieve student success; Success is a key tool for this, thanks to its ability to predict in a specific way, based on historical data from the campuses.

In addition, thanks to its ability to centralize information, it provides universities with all the necessary information to contact their students at risk of dropping out, keeping a personalized log.